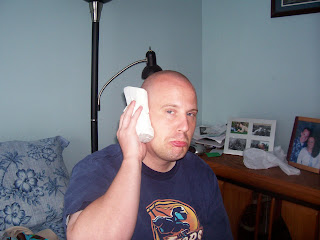 Anyone that knows Ben knows he is always getting injured or sick
with something weird. He just has bad luck this way.
The two latest injuries:
Shaving his head, he sliced off a chunk of ear.
It was a small piece, but it bled all day and reopened
a few times days later. Nice. 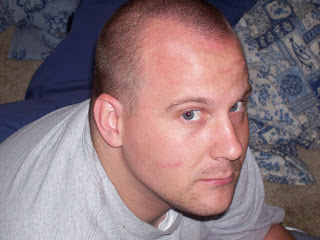 The day after we arrived in California, we were sleeping on the floor. Ben awoke to something on his face which didn't feel too pleasant. Benny had found his dad's razor and decided to shave him. Thankfully there's just a small spot on the right cheek. No great injury but I thought it was hilarious. That kid cracks me up

And I promise I will get around to an update with the the goings on of the move and how things are going.
Posted by Kari at 9:52 PM

I am laughing out loud right now! That is so funny. I thought you were going to say Ben was awakened to some kind of critter. The real story was even better.

That is funny! He knew what it was for and decided to help out!

That is hillarious, and I love Ben's face in the first picture. Also, I love the story of how Benny thinks all asians look alike, so do my kids...in fact Byron just calls all asians Koreans. So it is always fun walking through the store and your kids are yelling hey look there is a Korean like Harmony...and then I look and they are Chinese, or something else...hope things are going well! :)

Big Ben + Little Ben = Funny, Crazy Life. Glad Ben did not end up at the hospital this time.

Losing a little chunk of any body part doesn't sound good! I'm glad he didn't get his face slashed by Benny. Although Benny was probably really proud of himself for shaving with dad!