My sister Kimiko may say something about this on her own blog, but yesterday she called and told me some pretty cool information. Last week her husband got laid off (that is not the cool part) and so of course they are worried about finances. She got a letter in the mail from the student loan people saying they had forgiven the rest of her loan since she had been a reliable client! I have never heard of this! Maybe it is more common than we know, but that was so random and pretty darn amazing in my book.
I had also called her earlier in the day because I was so excited my hygiene license arrived in the mail. This means I can actually start working and earn money. After 6 months of being here and being really tight financially, it will be really nice to be able to help out if need be. And yes, I think there is a need. How the job market is, though, I do not know, but I was just excited that it finally came.

And then, today I called one of my insurance companies for the 3rd or 4th time in the past few weeks after getting a confusing letter yesterday. They are really hard to get a hold of and I was a bit frustrated with them as there were some mix-ups with my policy and payments. Basically they hadn't been charging me and ended up cancelling my policy. After getting a hold of them today, the woman I spoke with said all I had to do was fill out the form I received yesterday and submit next month's premium and everything would be put back in order. I said I didn't know if I wanted to start all over again and have a waiting period etc and she said that it actually was a glitch in their system and I had had all the correct information, so since it was their fault it would just continue with no lapse in coverage. I do not owe any back pay on past premiums for the past 6 months! It would still look like I had had coverage with them this whole time. 6 months of insurance premiums is a good chunk of money, and I am so thankful I was able to save that money because we really needed it.

I just thought it was really neat that these things happened and wanted to record them. I'm pretty good at remembering negative stuff and am working on remembering the positive stuff more. And just basically trying to write stuff down more in general. For Christmas my Grandma gave us all a book she had compiled of her thoughts and journal entries, and it is really great to have. I even wish there were more in there. So I know I need to do much, much better at recording things in my life. As boring as some of the things may be, it is important to me and I'd like to remember.
Posted by Kari at 10:01 PM 6 comments:

Basically all the stadiums up here (and apparently other places, too, as my parents said they do it at Dodger stadium and it is a big deal) have a night where they do discount tickets to LDS Church members. Ben is a Warriors fan so we went to the game against the Jazz. Our tickets included dinner at the snack bar and the evening consisted of missionaries singing the national anthem, LDS youth basketball during halftime, and Thurl Bailey chalk talk after the game. We didn't stay for Thurl as we had to get home to relieve the babysitter, but we had an investigating family with us that thought the whole thing was just awesome and they were so excited to be there, which helped us to be excited. We had a lot of fun and it was good to get out together. I kept waiting for people to boo the missionaries, or make some comment when they would announce something about the Mormons during the game, but everyone was very respectful.
Of course the Warriors lost. Poor Ben 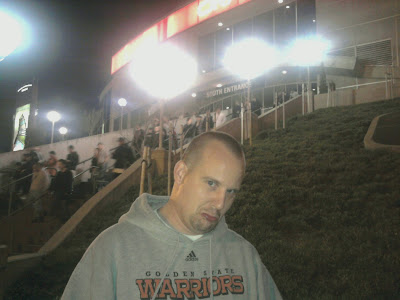 Random: These were taken as Ben left work a couple weeks ago. It had been raining and raining and I was ready to pull my hair out or some other drastic measure to vent my frustration with the nastiness. But that day it cleared up for a moment and we had a gorgeous view. He made some comment about how nice little things like that happen even amidst the gloom, but I was not having any of it at the time. However, now I look back and am glad he got a picture of that pretty rainbow. And it is true; good things do happen, we just don't always notice. 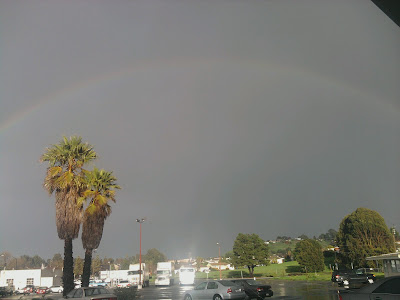 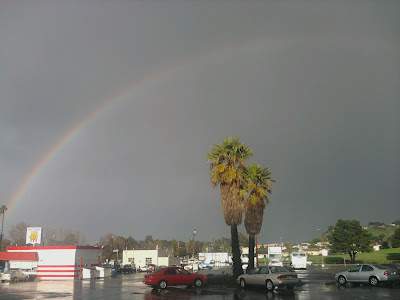 Benny likes to mess with my make-up. This pic was on a mild day. Yesterday, however, I let him do whatever he wanted while I cleaned the kitchen. This led to cleaning the entire bathroom after he applied foundation all over it and himself. There will be no more playing with mommy's make-up (especially as Daddy thinks it is not macho enough). 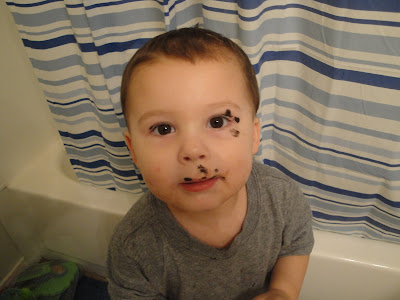 While I shower I usually give him some cereal and he watches cartoons in my bed. Look closely and you can see the froot loops so neatly lined up on the comforter. He is so precise in the things he does. It will be interesting to see what he chooses for a career. 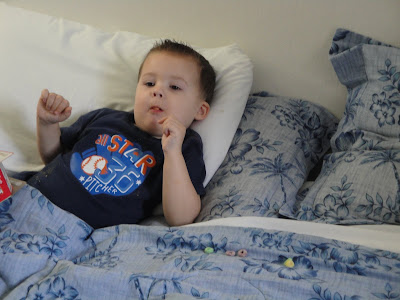 Valentine's weekend was pretty uneventful as Ben and I don't really like to do much for V-Day, but we did put Benny in a big boy "day bed." We had been meaning to do this for awhile (just like I am meaning to potty train) and finally got around to doing some rearranging. So far so good and he likes to have the freedom of getting in and out. The funny thing is he gets up a lot earlier now. Either that or I just didn't know he was up and left him in his crib for an extra hour or 2! I have mixed feelings about him officially no longer being a baby. 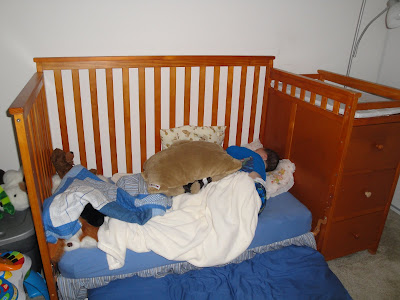 Then Monday was Presidents' Day and Ben had the day off. Yahoo! We actually planned the day and went to the SF Zoo as a family. It was a really nice day and we had a lot of fun. We don't get to go on many outings as a family, so we really made the most of it. The generosity of others really made the day even better as we got the tickets to the zoo, parking, and ride passes from one of Ben's coworkers. And then when we were in the petting zoo, we didn't have enough change for sheep/goat feed, and a little girl came up to Benny and shared hers with him. Very, very sweet. 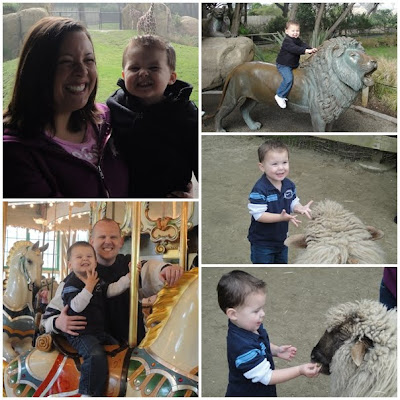 I'm too lazy to go straighten this video. No one will probably think it is as cute as I do, but I just think it's funny he tells himself he did a good job.

Benny got to ride the carousel twice thanks to the ride passes (train line was like 45 min, no way we were waiting for that!), and he gave his dad a thank you hug: 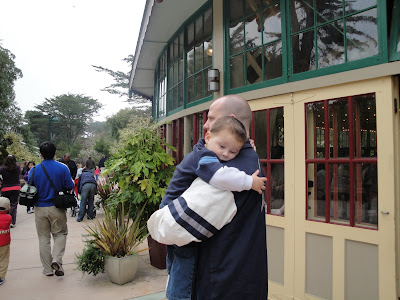 I have never seen something so cute before as this chimp. He/she was lying down under the blanket, then got up and wrapped it around himself. He just hung out with his blankie in the fog. 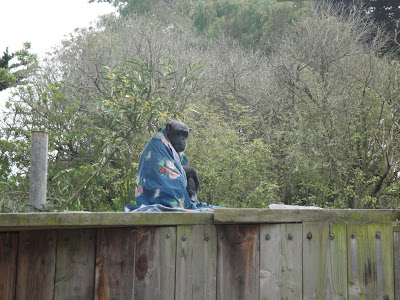 And this is the souvenir Benny bought at the zoo. He wasn't super excited about it at first since he wanted everything in the store, but since then he has been talking to it and tucking it in the covers with him at night. He also has a blue pillow that he will not share for the world, but he lovingly places his monkey on the pillow when they go to bed. 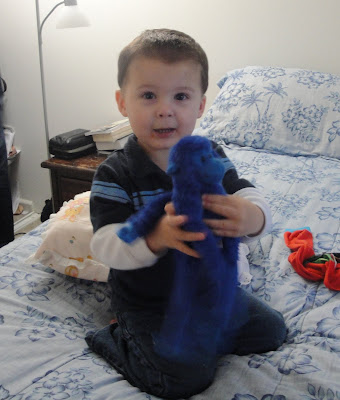 And that's about it for now. 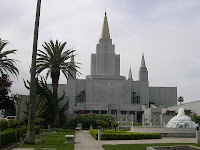 That's all I have to say about my evening. The missionaries called me a couple days ago and asked if I could provide a ride for someone they wanted to take to the Oakland temple visitors' center. I had met her once and was more than happy to take her to meet with them.
I was not prepared for the wonderful evening I had (yes, I actually used the word "wonderful"). She was an amazing woman, and I admire her very much for the changes she is willing to make in her life and for her will to do what is right.

If only I were willing to change like that. Would I be willing to turn my entire life around like she was?
I thought about how my life has completely done a 180 the past few months, and how much I whine about it. It has not been easy. Everything is pretty much opposite of how it was. And my attitude has not always been good; in fact, it's been more negative than positive.
But tonight I was humbled, and I was very grateful that I got to provide a ride to an almost stranger, because I got way more out of it than I put in.

I write this to remind myself tomorrow when I start whining again just how much I have to be grateful for.
Posted by Kari at 1:16 AM 2 comments: