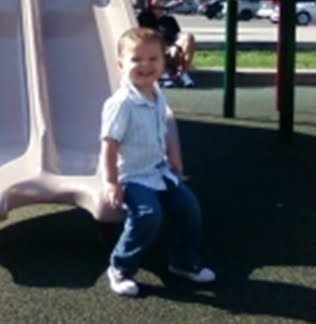 I know that picture quality is not so good (thank you, cell phone), but I was just tickled pink I actually got the boy smiling on camera! He HATES having his picture taken, just like his mom and dad. What a photogenic family we are. I used to be sad my mom and dad didn't have more pictures from my childhood; now I understand why. It is hard to capture every moment, especially when your child doesn't want you to.

We had a fun visit from Ben's mom and brother a couple weeks ago. They flew into Oakland from Salt Lake because they missed the boy. I'm sure they wanted to see us too, but it was definitely some quality Grandma/Benny time that week. Unfortunately, Ben had to work, so he missed out on a lot of the things we did. But we went to Sausalito on a rainy day and had some good seafood lunch along the waterfront. We went to Fisherman's Wharf and had more yummy seafood along the waterfront. It was a nice, warm day, so there were extra sea lions out on the wharf, more than I've ever seen. They were just basking in the sun, being fat, and smelling bad. On Saturday, we all, including Ben, got to go to the Academy of Sciences in Golden Gate Park. It is an awesome museum and we didn't get finished with everything, but some highlights are an aquarium and rainforest. We ended the week by having to speak in church on Sunday. Whew, glad that's over with for awhile! (The speaking, that is)
We appreciate them and are glad they could make the trip! 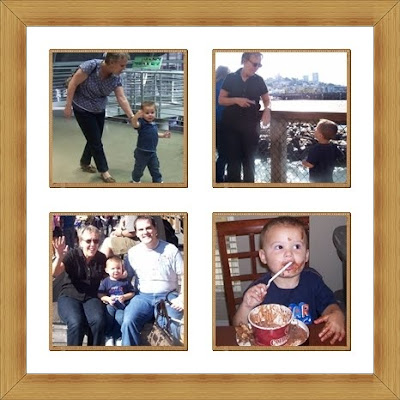 For Halloween, Ben's class dressed up yesterday. One of his coworkers made a Cat in the Hat hat, so that's what Ben was. He even let me put a nose and whiskers on his face and wore a tail. I was so proud of him for putting aside his manliness for the day.
Benny was supposed to be Homer Simpson, but that did not work out so well. He kept fiddling with the pillow we stuffed in his shirt and pants, and hated the latex bald cap we had on his head. So at the last minute we dressed him in his Chinese pajamas and painted on a little mustache. Too bad we didn't have a little Asian hat. So off he and I went to Berkeley to have dinner and trick-or-treating with some families from the ward.
I already felt frazzled as he was hyper (no candy yet either) and we had been rushing around to get out the door, but then as we started walking around UC Berkeley's housing and everyone was Asian, I felt completely stupid with my quarter Japanese boy who looks white wearing a supposed Chinese outfit. But he had fun getting candy door to door and eating loads of desserts. The funniest was everytime he got something in his basket, he took it out and wanted to eat it. I had to explain we were not going to eat all the candy along the way.
And yes, he was even more hyper by the time we forced him to go to bed way past his bedtime. 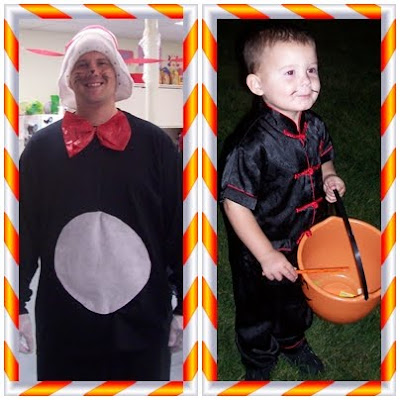 We are still plugging along with nothing too exciting going on. Ben is still really enjoying his job, and I am enjoying the mama's boy Benny has become. We are still trying to figure out where we're going to live. House hunting/condo hunting is pretty frustrating out here, a lot different than in Utah. But as long as I don't have to walk up tons of stairs and get to use my washer dryer that's sitting uselessly on the patio, I think that is all I will need! My how my tastes have changed;) I may become humble yet
Posted by Kari at 11:20 PM 4 comments:

That's what my child is. Or stinker (and yes, he has done lots of literal stinkies today. I am making Ben take care of one as we speak).
He's just being a typical two year old I guess. Today in Sacrament meeting he announced he wanted to go home and watch Yo Gabba Gabba. Grrr . Feeling a little worn out today

Anyway, this week we went to an awesome kids' museum right underneath the entrance to the Golden Gate Bridge. Talk about a view! The weather was gorgeous and there was TONS of stuff to do. We probably only got through with a thrid of it. It's not really a museum but more of an activity place for kids.
Wouldn't you know, both sets of batteries for the camera were dead and my phone also ran out of memory. I got a couple shots though, and hopefully the friend I went with will send me the ones I took with her camera: 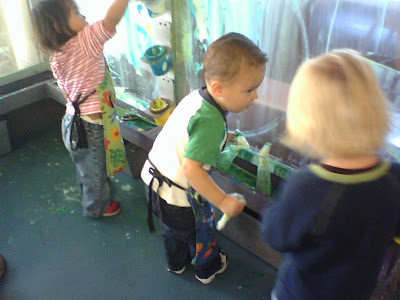 They're not the best quality since I took them with my phone, but can you see the aprons they are wearing as they paint? So cute! 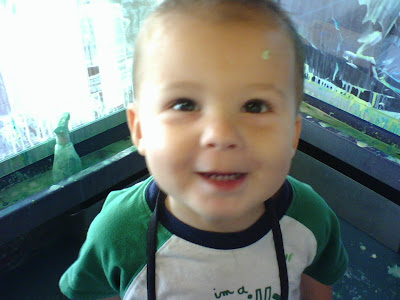 This last one really has nothing to do with anything. I just posted it cuz he looks so old:( We are at Walmart and he is sitting on his new Elmo potty in the cart 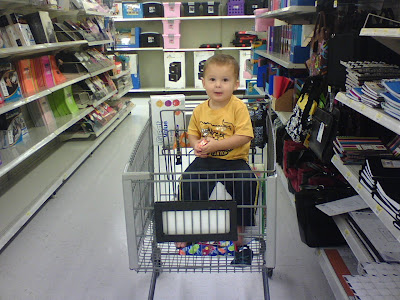 This week Ben's mom and brother are coming to visit. I will hopefully have lots of fun stuff to post next time!
Posted by Kari at 7:28 PM 2 comments:

Bla bla bla about my child

As I said in the beginning, this is going to kind of be my "journal," so many posts may be boring posts that only I care about and will mention my child(ren) a lot, like this one.

Are all kids this funny? My little 21 month old sure can talk. He says the darndest things. Right now he is obsessed with pillows and hogs all of them. We have given him 3 or 4 so at least he's not taking ours all the time now. The other day we had to run an errand, and after we got in the car he realized he did not have his pillow with him. I told him it was in the house, so he looked up at me and said, "Get it."
"No, I am not going to go back and get your pillow so you can take it to the store."

He is also obsessed with chocolate. He loves all candy, but especially chocolate (to his Grandpa Christensen's dismay/delight). I gave him a milk dud today and as he was running around, he started making gagging faces. I asked him if he was ok and he matter-of-factly said "choke!", fixed the long stream of caramel going down his throat, and went on his way. No idea where he learned that one.

He was the life of the party yesterday when we went to a ward member's home to watch the Saturday morning session of General Conference and then have lunch. He cried when he first got there as the new situation and faces scared him, but he warmed up by the time lunch rolled around. When he heard the banging plates and silverware, he hopped up into a chair and sat alone at the table, patiently waiting for all the food prep to be done so he could eat. When it comes to food, he is not shy.

He is also super into TV. I have created a cartoon monster. When we first moved into these apartments, we didn't have any of our stuff except for our laptop. We used it to steal internet off of one of the neighbors and let Benny watch episode after episode of "Sponge Bob Squarepants" until our stuff came. Once the TV came he always wanted to watch "toons." It is the first word he says when he wakes up in the morning. He has his favorite shows. He does not want to leave the house to go the beach or the lake. I am a horrible mother for allowing this to happen and he will fry his brain. Actually though he fortunately watches learning shows like "Elmo," "Dora," and "The Backyardigans." I'm the one that finally turns it to "SpongeBob" when I can't take another rerun of "Yo Gabba Gabba." That show is WEIRD. But he LOVES it.

He is still very big and very heavy. We wonder when he's going to slow down as his doctor swears he will not be the huge football player we're hoping for. He's also not too bad looking and we get a lot of attention and comments whenever we go out. I had one lady at the drive-thru of Carl's Jr. practically poking her head into my car so she could ooo and ahhh. I finally said I had to go and drove off. It's nice that people like him though. He's always smiling and telling everyone hi and bye.
Oh, speaking of drive-thrus. I remember one time my former boss telling me his family went to the drive-thru cleaners to pick up some clothes once and his toddler boy piped up from the back "I'll have fries!" I thought that was so funny. Well, now if I go anywhere drive-up Benny asks for fries too! I guess we eat out more than I thought we did.

Here he is being attacked with a hug by a tiny girl. He cracks me up 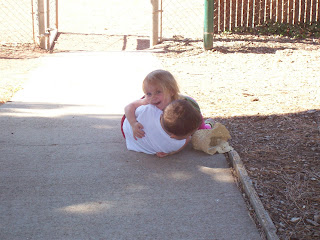