I said "stuffs" cuz that is the way my mom has always said it. Stuffs is plural for stuff. Oh, wait.

Anyway, I am too tired to organize this post or write much about it. 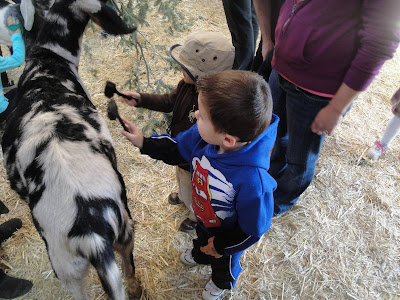 Oakland zoo. It was nice Daddy was able to have MLK Day off work to spend time with us. 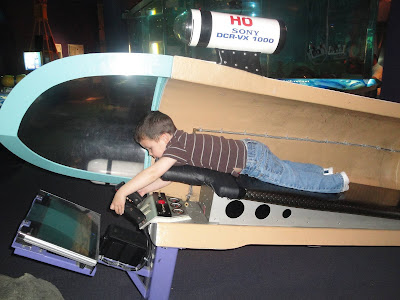 Tech Museum in San Jose last week. This is a small submarine. 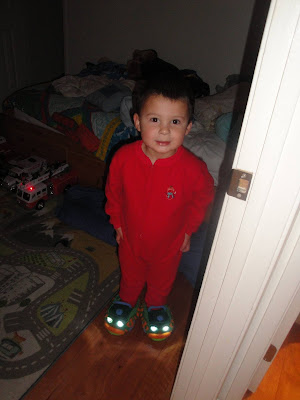 Awesome slippers Big Ben brought home from work for Benny. They are always getting rid of cool stuff that is not "age appropriate" for the students there 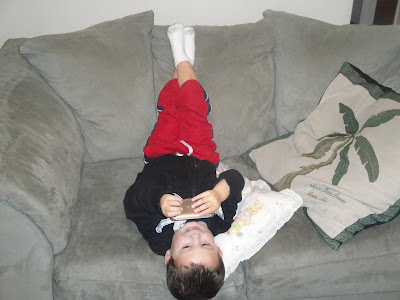 Chillin' with dad's ipod. Ben is nice to share since he owns at least 3. I, sadly, have none. 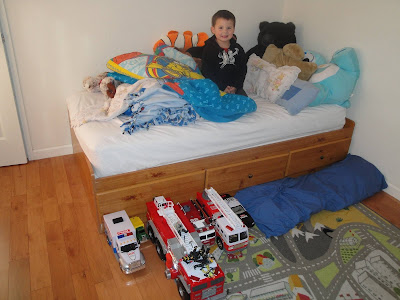 All the rescue vehicles are parked backward in the station so they can rush out to help somebody when it's time. 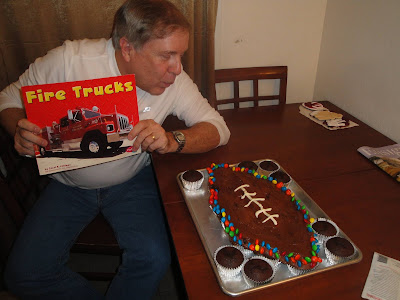 My 2nd non-rectangular cake. We celebrated my dad's bday on Superbowl Sunday, so even though he doesn't watch football, he got a football cupcake cake 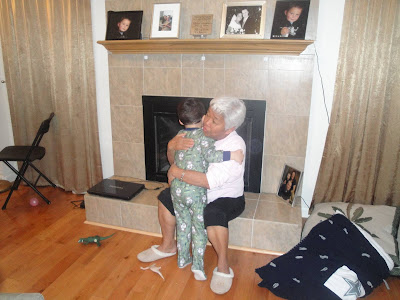 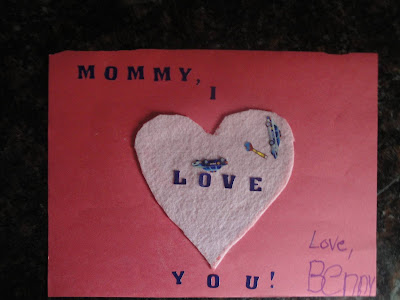 I can't remember why but Ben watched Benny all day one day. They read books, practiced letters and numbers, played, and did crafts. I was very impressed. I still say he should be stay-at-home dad. He's much better at it than I am. (No, Benny did not write his name by himself). 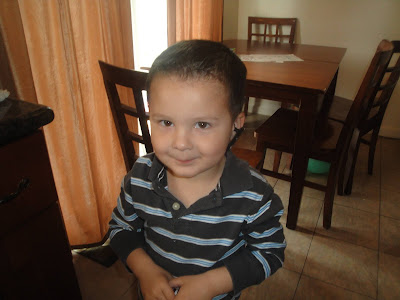 Trying to call Grandpa Tom & Grammy on my "special phone." 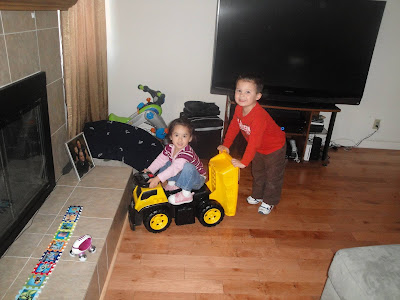 They play so well together (most of the time). It's really fun. 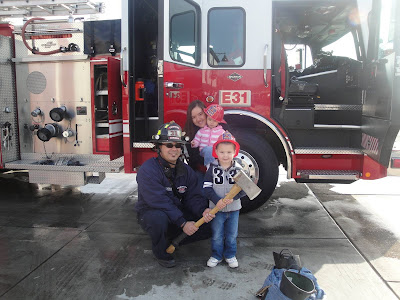 And, most importantly, Benny's trip to the firestation! I've been meaning to take him for several months now and have been trying to find a day to fit in several things together to make it worth a special trip to Cordelia (Fairfield). They were so nice and actually seemed excited to have us there. They invited us back anytime. They were even nice enough to tell Benny that real firefighters use the potty, not pullups or diapers (or their underwear! Grrr), so he said he would start using the potty all the time (have yet to see this happen, but we'll see.) It was so cute to see how excited he was, even if he got all shy once we were there. I even thought it was pretty cool. To all my firefighting friends, thank you for all you do! My son sure thinks you are heroes
Posted by Kari at 11:16 PM 4 comments:

And I'm not talking about Benny. I'm talking about two goobers in their early 30's. I think back to 8 years ago when our friends introduced Ben and me to each other (Adrienne speaking): "Kari, let's get together since we haven't seen each other in years. We'll bring a friend for you to hang out with--he's a big goofball, and you're a big goofball, so you two will have fun together."

Several months later I got 2 baking stones as wedding gifts. I regifted both of them. I was NEVER going to be talented enough to actually make something from scratch. I also got a breadmaker and promptly packed it back up for 8 years after my 1st failed attempt using it. Couldn't even make bread from a machine.

Now I make stuff--dinners, desserts, baked goods. Ben even complimented me by telling his staff: "My wife really sucked at cooking when I met her, but now she's pretty good." What a sweetie.
Anyway, I am slowly wanting to learn how to can and do food storage stuff. Not saying I've done it yet, but I am looking into it. I made pizza from scratch, including the dough, the other day. Crafts still give me anxiety, but I wouldn't be surprised if one day I made a homemade card or something. I just need to conquer my fear of Michael's craft store.

I'm not saying all this to brag about my awesome skills, because they really aren't AWESOME, but maybe awesome.

Ben has changed, too. He used to get so caught up in sports that I would often cry because I was so frustrated with him. Now he is cancelling his sports package from DirecTV, and has missed games to do family or church activities.
I think the biggest is how much he serves others. Ben has always been a good guy since I've known him, but I definitely think he's better. Sometimes I get annoyed at how much other people need stuff and I think they should do more for themselves. But Ben doesn't complain. He just goes and does what needs to be done. I need to be more like that.
The biggest moment that sticks out to me was last week. Benny and I had been gone ALL DAY to San Jose and were exhausted. I just wanted to go home and have dinner and go to bed, but we had to stop at the store first. As we were leaving the store, the usual "Save the Children" guy was outside asking for change. And then the guy pointed out there was a lady in need of a jumpstart for her car. I was so tired I was close to tears. But I remembered two things: 1) A friend who kept having car troubles had to rely on the goodness of others on several occasions, and what if that were me needing help?
2) Ben had had us purchase jumper cables for instances such as this, so they should be used for instances such as this.

The rich-looking lady in the nice clothes with the nice car and dead battery said she didn't have any cash to give us at the moment, and I waved her off and told her I didn't expect anything. I explained we were lucky to have jumper cables because of my husband. We bought them one night when someone needed a jump and we didn't have cables. Ben had said "We really need to have cables in case someone needs help again." He didn't say "We need cables in case WE need help." He was thinking of how he could help someone else.

And that got me thinking. Eight years, 5 miscarriages, 1 child, and many, many experiences later, we're different people. We're definitely not perfect, but I hope we are better people than we were. There have been hard times, but those bring about the most good.
So happy engagement day to us (in 23 minutes)! Can't believe it's been 8 years.

***And because I'm still me, you better believe I told that lady with the dead car battery that there was an auto parts store in that very same parking lot so she'd have jumper cables in the future. Nicely, of course.
Posted by Kari at 10:49 PM 13 comments: