Mr. Mom has been at it again. It drives me crazy that he is doing such a good job of being home with the kids.  They do projects almost every day.  These are their turkeys.  Now they're working on balloon santa claus. 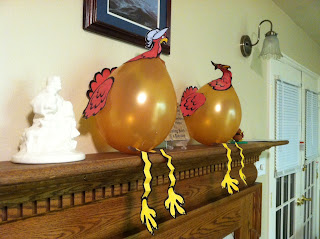 I had a birthday a couple weeks ago.  Ben packed up the kids and surprised me at work with flowers and a handmade card by Benny.  I was such an emotional wreck that day due to some things with work (grateful to have some work for the time being, but the situation isn't exactly ideal and I have really struggled some days). When I saw them I just started crying.  How embarassing.  But they were so sweet and I sure appreciate them. Ben took me to Tucano's that evening and then we went to a movie on Saturday.  It was nice to get two dates that week! And although things at work aren't perfect, a nice coworker took me to lunch, and the boss got me a cake and gift. But yeah I pretty much cried my eyes out that day.  Don't know when's the last time I've been that emotional! I told Ben he had to get a job soon.  But then I see the things he does with the kids and wonder if maybe we don't need him to go back just yet;) 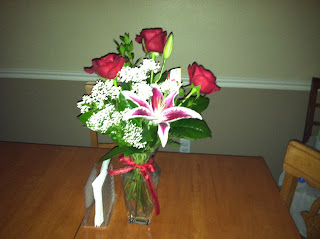 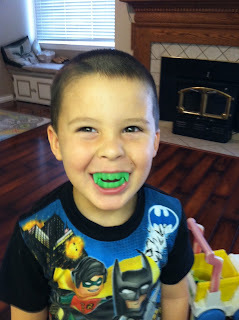 And Ellie is just as crazy as ever.  Yes, her head is stuck and she is not happy about it. 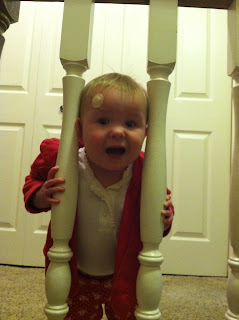 And then we had Thanksgiving, which was a nice day. Ben's mom and brother came over and we had dinner here at the house.  Waaaay too much food. Ben got to watch the Cowboys afterward (and fell asleep during the game! Don't know if that's ever happened). And then we watched "Brave." Benny loves to watch "family movies," and he had been waiting all day:)
And Ben and I are trying to lose weight.  I'm trying to lose everything I gained AFTER the baby haha. My older sister has lost 40 lbs (way to go, Helen!) and finally made me feel like I could actually do it, too. It's annoying that Ben has been working on it for less time than me and losing more quickly, but at least it's nice that we both are trying to eat/not eat the same things. The holidays make it hard but hopefully we can be strong.
Ellie's 1st birthday is this week.  To be continued...