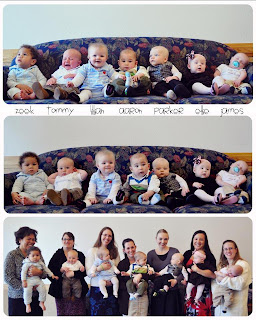 These are 7 of the 10 babies born this past year in the Hilltop 2nd Ward, Concord CA Stake.  This has been a small ward with mostly older permanent members and a few younger couples and families moving in and out for school and such every fall.  It encompasses about 30 miles, including some very rough cities (Richmond) and has an attendance every Sunday of around 100 people.  Those of us who actually attend are definitely put to work and kept busy:)

There has been a lot of talk about what to do about this ward.  Get rid of it?  Combine it with another one?  About a year and a half ago the Stake President said we would "grow the ward." Everyone's job was to find new members and reactivate members who weren't attending.

Well, it has grown! I don't know when there have ever been this many babies in the history of this ward. And every single baby in this picture has an awesome story behind it.  I mean, what baby isn't a miracle?  But truly, these babies are special.  Two of us thinking we were done having kids, and pleasantly surprised.  Another two not really able to even have children, one of whom being told it was impossible, and surprise.

We have loved being in this ward and being able to serve in the callings we have.  This is not an easy area, and I have complained about the Bay Area more than once, but we would not trade our experiences here for anything.  We have met some amazing people and truly learned what a ward family is. We just love these great moms, their babies, and the wonderful people of the Hilltop 2nd Ward. I know these families have all been blessed because of who they are and how much they serve those around them.

You get what you ask for

In the previous post I said Ellie is super sweet and mellow and stuff, and for the most part she is.  But sometimes she does an alien scream, and tonight I just had to laugh while this was going on.
Benny was such an easy going baby and really never complained about anyone or anything, and this kind of bothered me.  I had to be the working mom when he was a baby, and it bothered me that he didn't seem to prefer me over anyone.  I wanted my baby to like me.
So, this little girl comes along, and now that she is getting older, she definitely seems to have a preference.  I like that she wants her mommy to put her to bed, but I have held her so much this week my back felt like it was going to break.  I collapsed down beside her yesterday and dreaded the fact that I was going to have to wake up again today and do it all over again.  Thankfully my muscles miraculously feel like they will hold out and we are ok.  I'm tired, but what mother isn't.

This reminded me of something else I said several years ago. My friend Gina and I were talking and she mentioned something about how Ben and I seemed to have such a great life with lots of vacations, good jobs and a house and not worrying about having kids yet, or something to that effect.  Nothing major, just chatting.  She, at the time, lived in a small basement apartment while her husband finished school and they had just had their second child, quite a bit sooner than they were planning. She had things under control but I could see how she might think maybe my life was a bit more fun at the moment.
I actually was kind of surprised this was how she saw things and remarked that we weren't putting off our family to do fun things, but we were unable to have children as of yet.  If we could, we would give up all that extra stuff to be exactly where she was.

Now, years later, when I am exactly where she was, I have to remind myself this is what I said I would do.  I would give up my job, my house, and fun vacations to have those two kids she had. When I am going crazy in this small apartment with a four year old bouncing off the walls and a screaming baby, I chuckle and remember this is what I wanted.  I hope I am not one of those people that says something without really meaning it. 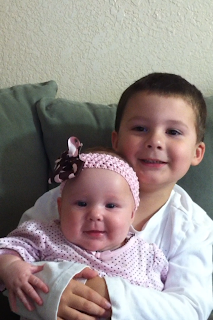 Since we don't live in Utah anymore for the annual Reese Family Easter Egg Hunt at my sister's house in Willard, we decided to do our own.  A gal from church moved here from the big city of New York, and since people kind of have yards and stuff here, she hoped to take her daughter (pictured far left) to an Easter egg hunt. This gave Kimiko and me the push to throw one together.  We invited the little kids from our ward at church and hid eggs in the grassy area behind Kimiko's townhouse.  It actually ended up being quite perfect and the kids had a lot of fun. 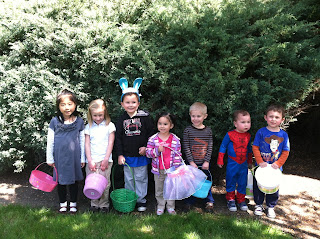 I cannot believe how big and grown up Benny looks:( 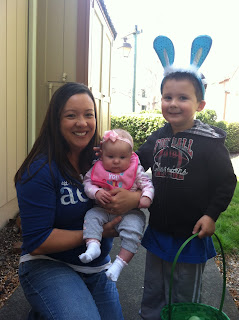 And we just love this baby.  She is so sweet and cuddly.  She's not very good about looking at the camera, or doing tummy time, or taking naps, or keeping her milk inside her body instead of back up, but other than those minor details she is pretty much perfect (except for the evening screaming when she doesn't get a nap during the day.  I need to be better about making sure she gets to sleep when she needs it). She is four months now and growing and smiling and getting big way too quickly. 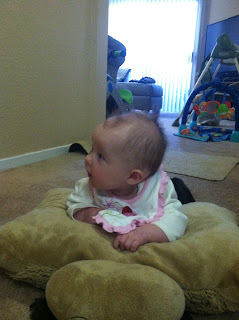