I just enjoy this guy. Much more so than I ever thought I would. When we first found out he was not a girl, I wondered what the heck I was going to do. I only knew hair and Barbies and Cabbage Patch dolls. I didn't know anything about dump trucks and hot wheels. But he cracks me up. We find out Monday what we're having and I would be fine with another boy, and a girl would be fun too. So we are just excited Benny gets to be a big brother.

We always check on Benny before we go to bed. This one night I peeked in and noticed he was naked and asleep. In the morning I asked him why he took all his clothes off and he matter of factly said he knew he was going to pee the bed and didn't want to get his clothes all wet! Such a thinker ha ha 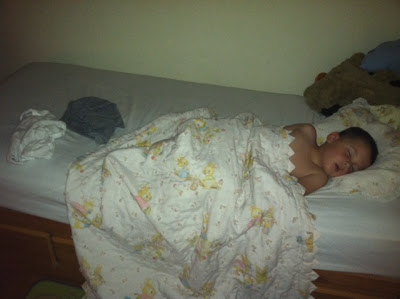 Benny does not share his pillows with anyone unless there is a very good reason. This night we peeked in and saw he had carefully placed his two puppies on a pillow each and everyone was asleep. 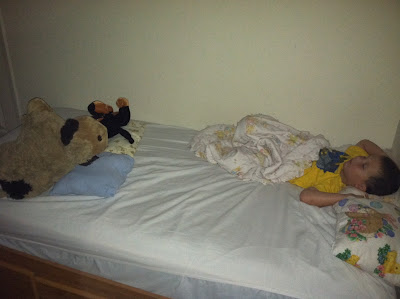 He is such a hard worker when he wants to be. There are two things he could do all day: take out the trash and weed. This was taken a few weeks ago, but he loves to go out and help his dad with the yard. Today we had a ward service project and he went to an older lady's house and helped Ben weed for 3 hours.
He also wants to take out the trash as soon as he sees there is any garbage in it. He knows there are three bins--garbage, recycle, and green waste--and puts things in accordingly. On trash day he helps roll out the garbage cans, and brings them in on his own after they're empty. We think we're going to start an allowance type thing along with his poop chart, so he'll get quarters for pooping and doing chores etc. We'll see if he's jazzed about it at all but I appreciate his willingness to help. Now if he'd only pick up his toys.... 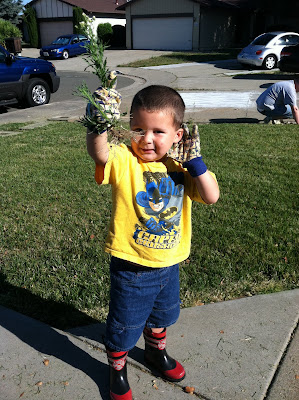 He thinks he is such a big boy, much older than his peers: 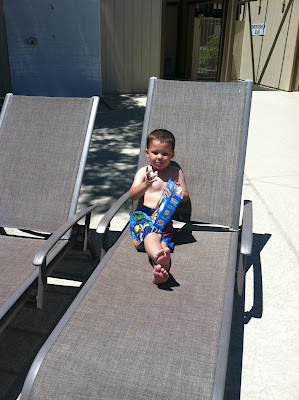 I already posted this on Facebook but he is such a typical boy. I think my sister Kimiko calls my mom several times a week to tell her the funny things he says. Very thankful for this little monkey. 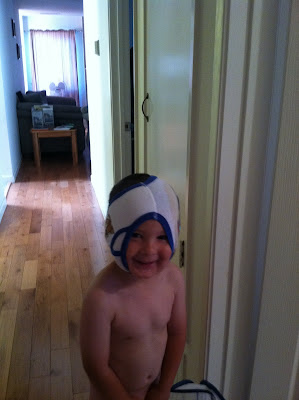 I love the picture with the puppies on the pillows. And good job posting so many entries! I am so far behind on my blog, but if you can do it, I can too.

I love reading about little Benny! He is so much fun. I can't wait until you find out what you are having! I'm just so super excited for you :)

K, he cracks me up. Especially about ditching the clothes so he won't pee on them :)

What a wise little man! We are staying in Stockton and are definitely planning on visiting you and Kimiko while we are here! I think we're only an hour and a half away! We'll have to get phone numbers through our parents and plan a date!!! Can't wait to see you!